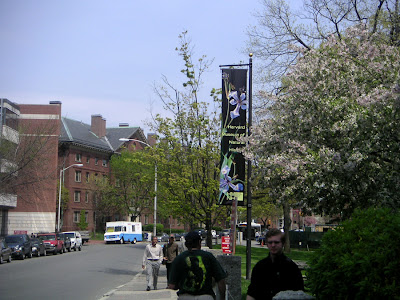 
In May 2006 Lee and I visited Cambridge, and of course stopped to see the Museum of Natural History on the Harvard campus. 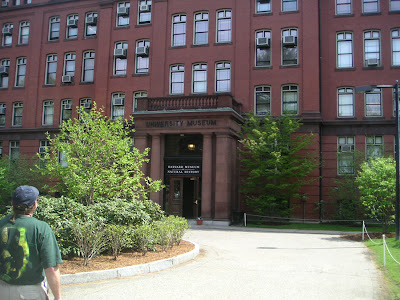 Harvard Museum of Natural History
That's Lee on the left wearing, appropriately, his howler monkey T-shirt from the Belize Zoo. As you can see by the sign on the door, it's just called the Museum of Natural History, but the building houses the prestigious Peabody Museum of Archeology and Ethnology as well. The animal displays in this building are the "public face" of the Museum of Comparative Zoology. I didn't realize that the bulk of the MCZ collection was in another building (Agassiz Hall) or I would have tried to find it. How many times have I seen the time-honored initials MCZ in some interesting publication? As it was, we did find a few tapirs and their kin. 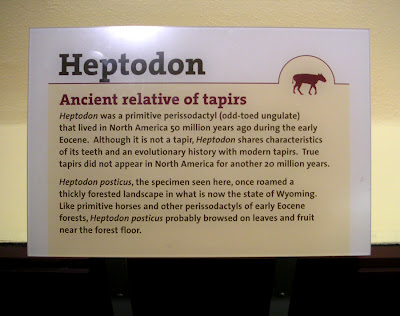 Amazingly, one of the first signs we saw had the word "tapir" on it. (Click on the image to enlarge the sign.) 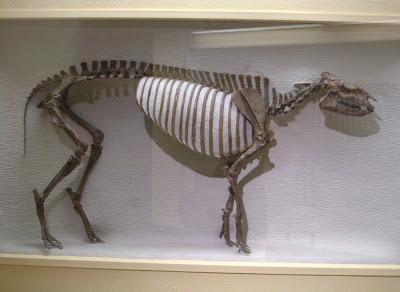 Fossil Heptodon
Say "Hello" to Heptodon. If you'd like to compare skeletons with a modern tapir, see the re-posted photo of a Bairds tapir skeleton below. Remember, Heptodon is a 50-MILLION-year-old relative. 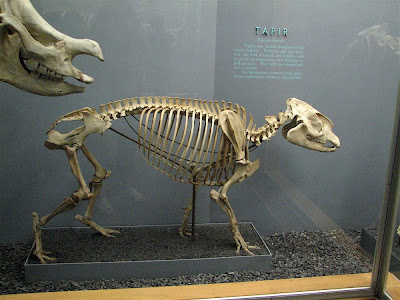 Baird's tapir skeleton in the Smithsonian,
photo by Carol Schaffer 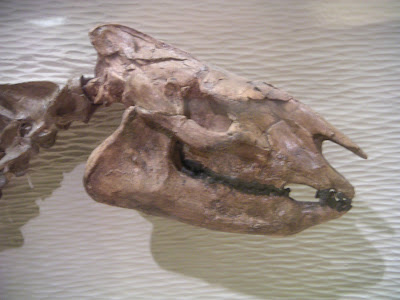 Fossil skull of Heptodon
Sorry about the poor quality of the photo. It was pretty dark inside and I was using my 2006 camera. For comparison see a modern Baird's tapir skull re-posted below. 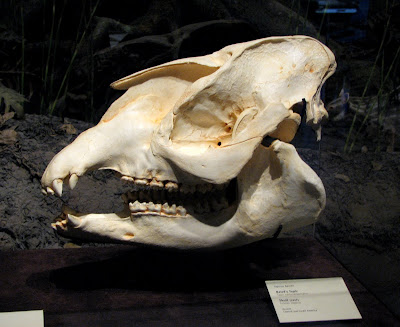 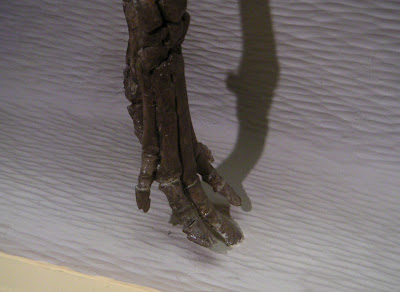 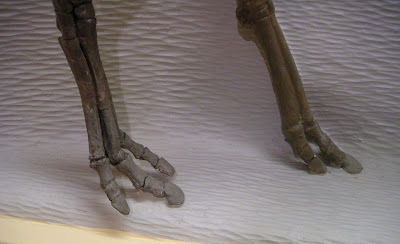 And here are Heptodon's rear feet with the three-toed structure similar to those of a modern tapir. Check out what the real tapir's skeletal foot looks like below. 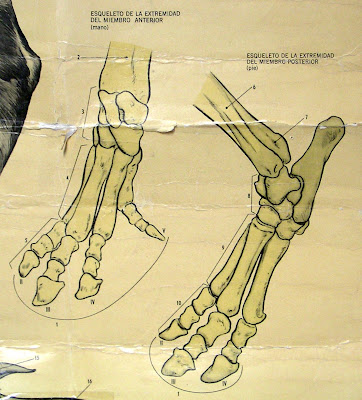 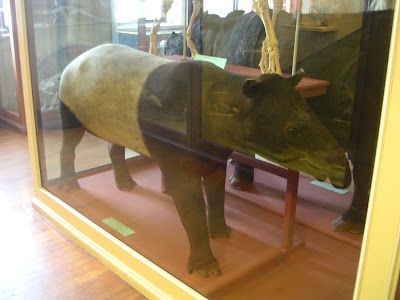 As we entered another room, a hall of mammals, the real prize awaited. Who would have imagined that tapirs would occupy such a prominent place? 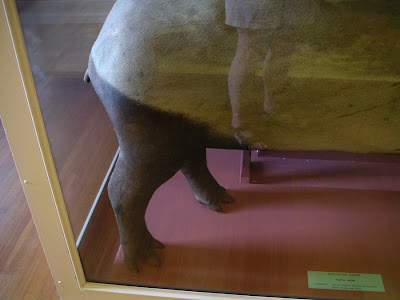 You could tell the tapir had been here a long time, but it didn't look too bad. Here you can see the tapir's back feet along with the back feet of the photographer. 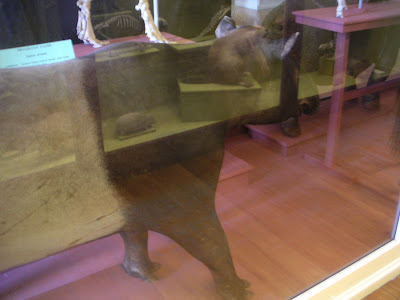 The front end of the tapir . . . I was just trying to be complete. Also trying to avoid reflections, although they are intriguing. 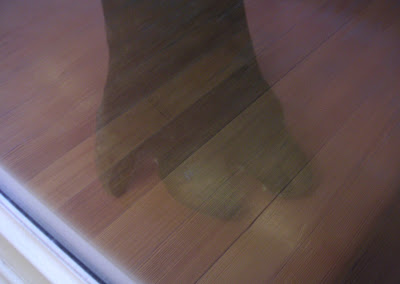 Front foot of the Asian or Malayan tapir seen above 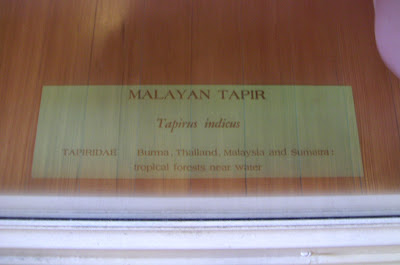 Here is the tapir's sign. It has the same common and scientific names we use today, although one of the countries has changed. Burma is now Myanmar. 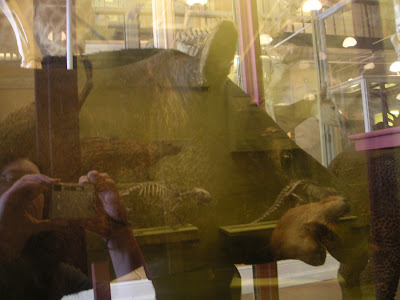 Here's another surreal pic of the tapir with the museum background and the reflections suggesting random and creatively-juxtaposed thoughts. You can also see the photographer in the lower left. 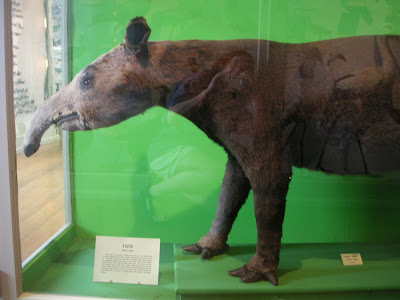 Now here's where things begin to get weird. This is a mountain tapir (Tapirus pinchaque). Can you tell? Really? I love museums. I even love falling-apart old museums. Maybe especially those. And I even enjoy falling-apart museum exhibits, but this poor scraggly tapir took me aback and made me question the entire concept of putting him on display. In fact, it was mostly because I couldn't find the right context for this tapir that I hadn't posted the photos soon after our trip. I could have understood it as a display or commentary on the history of taxidermy or the history of animal collections in museums, or the history of museum collections in general, but I could not understand how this distorted creature had become a prominent feature on the "public face" of the Natural History Museum at a prestigious scientific institution. Granted, as I was collecting links for this post I discovered that the Museum of Comparative Zoology is upgrading. Until now I had no idea. In fact, I'm still not sure which part of the museum is upgrading, this building or only Agassiz Hall, nor do I know what the disposition will be of the mammals I saw on this day in 2006. But what immediately came to mind was an issue that has been troublesome to me for most of the past decade. 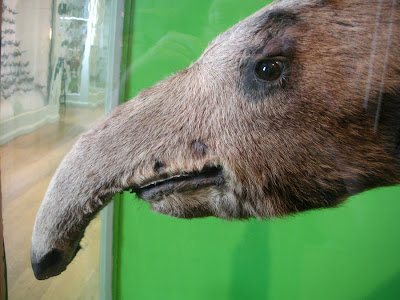 When the Museum of Natural History in London (not pictured here) was revamping its gorgeous halls sometime during the last ten years, they had to make decisions about whether to display their old (and I mean very old) taxidermied animals in the upgraded setting; and I learned that they were not planning to replace the faded and bedraggled animals. Some of them, including a baby lowland tapir, looked to be approximate contemporaries of the mountain tapir above. Are you kidding? I found this news puzzling and I wondered why they wouldn't consider displaying one that would give the public a better understanding of the living animal.
The curator replied - and I cannot understand it even today enough to put it into the proper words - they preferred a policy of using the old taxidermied animals rather than - how would you say it? - damaging? using up? compromising? another animal. What? I would certainly not condone taking an animal out of the wild or killing a living one for a museum exhibit, but how many tapirs have died in captivity since these ratty specimens became ready for the dustbin? Couldn't newer bodies undergo improved taxidermy without doing any harm? 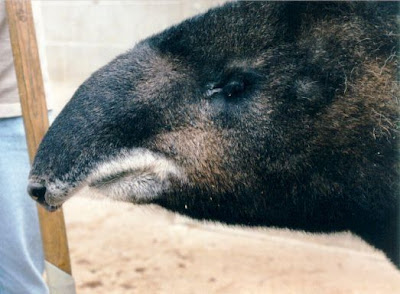 Mountain tapir at Cheyenne Mountain Zoo,
Colorado Springs, Colorado
Photo by Sheryl Todd
Unless a person already knows tapirs, who is going to guess that the tapirs in the two photos above are of the same species? How could anyone possibly use the first tapir to any degree as a reference? You would never know that the mountain tapir has very prominent white fur around its mouth or that its coloring is reddish brown to black. How many thousands of people will visit this museum who will never get a chance to see living mountain tapirs in Los Angeles, Colorado Springs, San Francisco, Langley, B.C., Canada, or Cali, Colombia? 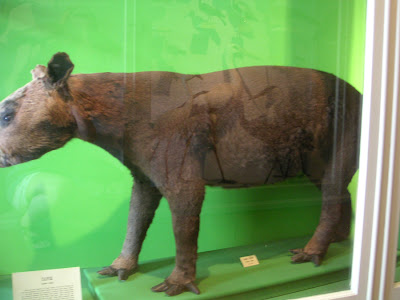 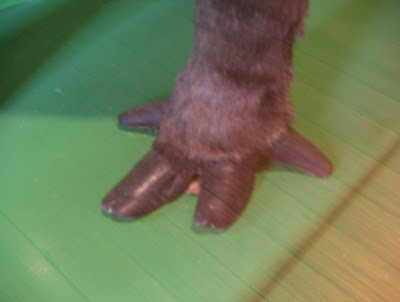 Continuing the tour, let's have a look at the feet of our mountain tapir. 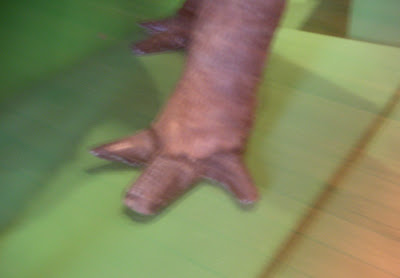 I always wondered how women (or anyone) with two-inch nails could type. This poor tapir looks like it could have had an analogous problem just trying to walk. The foot of the Asian tapir (nine photos back) gives a better idea of the way a tapir's hooves should look. 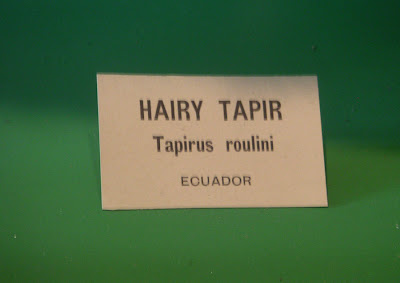 The sign is quaint with its ancient information, which would be fine if this were a history of exhibits as mentioned above. Not so fine if you're trying to teach something in 2006 or 2012. 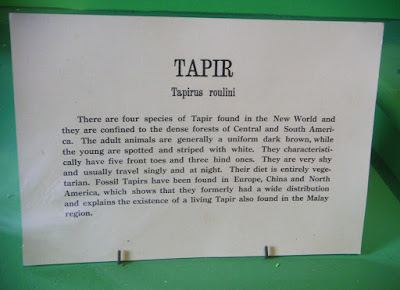 OK, here is the icing on the crumbling cake. Click on the sign and read the part about the toes. Reality disconnect. Count. The. Toes. The number of toes on a tapir is one of the most salient facts concerning what makes a tapir a tapir. The number of toes gives it its unusual classification as a perissodactyl. I wonder how many students over the decades have wondered if that fifth toe is vestigial, buried under the skin among the other bones of the foot? It is not. Had the sign given the correct number of toes, this tapir would have made a more confident comparison with its early relative, Heptodon, a scant few yards away in the other room. 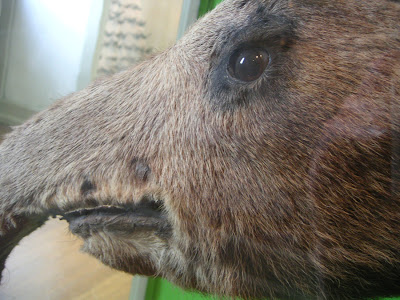 Poor tapir. Poor students. Doesn't a display like this defeat the purpose of the time and money put into the exhibit by the museum in order to educate? I enjoyed my visit to this historic place. And I certainly hope the new museum does not decide to go the way of London, photos from which I will highlight another day.
Please e-mail your photos and text if you would like to see them on this blog.
This blog is sponsored by Tapir and Friends Animal Store.
Join us on Facebook.
Join WORLD TAPIR DAY on Facebook.
Posted by tapirgal at 1/09/2012 05:26:00 PM

Wow what a great post and again spoken in the cool objective tone of a scientist/journalist. You're right it is hardly inexcuseable to find mistakes in guide books or animal books about tapirs, but in such an important museum. No wonder people often say a tapir has a snout as long as an elephant. I hope people find this post. Too bad you don't forward it to the museum.

Interesting post, Sheryl. Makes me wonder how much of what we see in natural (and other) museums is scientifically accurate (or truthful).

Francisca, thanks for reading and commenting. Mistakes in tapir info are rampant in literature, on zoo signs, etc., and this is only the one subject I know very well.

scott davidson said...
This comment has been removed by a blog administrator.
2:25 AM