The location is near the southern tip of Ecuador. "This is the first camera trap photograph of a Mountain Tapir taken at Tapichalaca, although they are occasionally seen." That's about all I know for now. You can read more about the World Land Trust's project via these links.
Posted by tapirgal at 4/28/2008 10:33:00 AM No comments: 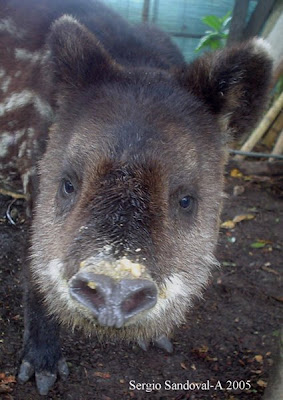 I want to share with you and the Tapir Day people the picture that I use on my IM. I think it's very cute. It was taken in 2005, and this baby tapir is from the Huila region in the Central Andes of Colombia. It was taken near Pitalito, Huila. Nowadays, if still alive, this tapir must be nearly 3 years old. But nobody knows what's going on with him/her.

Send your World Tapir Day photos (a tapir photo in honor of the day, or photos of World Tapir Day events, how you spent the day, you in your tapir shirt, etc.) and we'll put them on the blog. Just click on the link on the right side of this page to see all posts with WORLD TAPIR DAY PHOTOS! See more pictures on the TAPIRS Google Group. 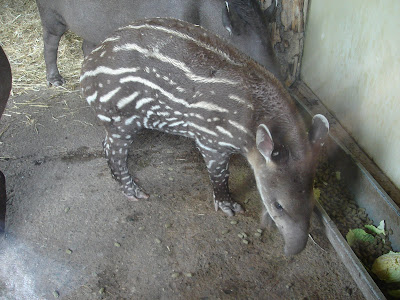 Happy World Tapir Day everyone! My visit to Chester Zoo with my partner and a couple of friends was great. We arrived just before the tapirs were let out and fed, and surprise surprise, there were four - not three as I'd been told by the zoo only a week before. I need to find out whether it's a boy or a girl and what the name is, but here's a picture of the little sweetheart - taken through glass so not the best quality. . . .

The tapirs were pretty impatient to be let out, but of course, as soon as they were, they decided they'd much rather be back inside again! Well, it was a bit of a cold wet day really. Such sensible creatures! I've taken a lot of pictures and some video - of the tapirs and the zoo generally - and I'll start editing it all together tomorrow into, hopefully, something fun.

Please e-mail your photos and text if you would like to see them on this blog.
This blog is sponsored by Tapir and Friends Animal Store.
Join WORLD TAPIR DAY on Facebook.
Posted by tapirgal at 4/27/2008 09:00:00 AM No comments: 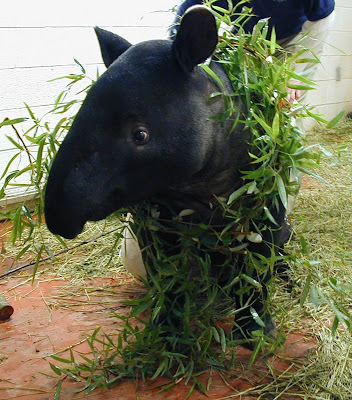 This is Bintang, one of the Malayan tapirs born at the Woodland Park Zoo in Seattle during the time Heidi Frohring was their keeper and best friend. Heidi sent me this photo in December 2000. You can just see Heidi behind the tapir and its wreath made of foliage. She found many creative ways to use plants and other tapir food to keep the animals interested and occupied. Over the years she sent wonderful photos, creative pictures with heart. Someone else must have taken this photo, since Heidi is in it. (If you took the photo, please let me know and I'll give photo credit.) It embodies the same spirit as many of Heidi's own photos. The tapirs become real to us through their expressive faces and gestures, or the photos captured them in lighting or a moment that is memorable and touches something within us. We relate and we care.

SEND YOUR WORLD TAPIR DAY PHOTOS AND WE WILL POST THEM!

Personally, I'm celebrating World Tapir Day not so differently from other days. Making blog posts, working on the web site, sending animal toys and gifts to people who order them online, e-mailing others involved in the tapir world. Also typically, I'm wearing a tapir t-shirt and (since this is the Pacific Northwest, after all) wearing a tapir sweatshirt over that. Next week I'll be visiting Seattle to celebrate my birthday and to meet Wilson Novarino, a tapir conservationist, researcher, and educator from Sumatra, Indonesia. The Tapir Preservation Fund has helped in a small way to support his work since we met online nearly a decade ago. I'm certainly looking forward to meeting in person, and of course, to renew acquaintances with the wonderful staff and the tapirs at Woodland Park Zoo. I have a few friends in that city as well. It will be fun. I'll be sure, as always, to wear tapirs and take my camera!

Whatever you are doing today, the FIRST ANNUAL WORLD TAPIR DAY, please think of these animals and look forward to a world in which more people will know of them through your efforts and to care about their conservation. Wear a shirt from the Tapir Gift Shop or CafePress (search for the word "tapir"). Or make your own wearable tapir art. Talk to people when your shirt becomes a conversation piece! I recently bought myself a mouse pad of the mountain tapir on the tapir items page, and immediately Lee asked to have it, as he has also fallen under the spell of the tapir. Anthony Long, who came up with the original idea for World Tapir Day, has provided tapir items you can buy in his World Tapir Day Store on CafePress. Proceeds from your purchase will go to tapir conservation projects, and this year's funded project will be April and the other Baird's tapirs at the Belize Zoo. During the summer months, tourism slows down and it's always a struggle to get enough money to feed the animals. If we all pitch in, we can help ease the burden this year. Sharon (the zoo's founder and director) is an amazing person who has done so much to create a climate of conservation awareness in Belize and an awareness among locals and tourists of Belize's wild animals. She's created many conservation models in Belize that really work and have been an inspiration to others in the field. Let's help her feed the tapirs this year!

Fortunately these days when you google tapirs, you come up with a lot of material. Try it, it's fun! Meanwhile, here are just a few links relevant to this post: 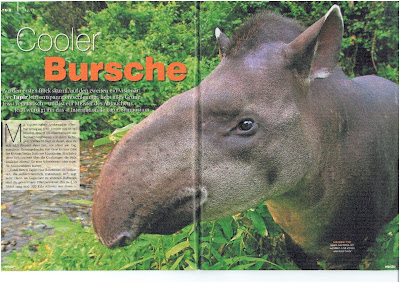 This announcement was made by my friend and tapir colleague, Stefan Seitz. See below for the 2nd double-page spread in the magazine. 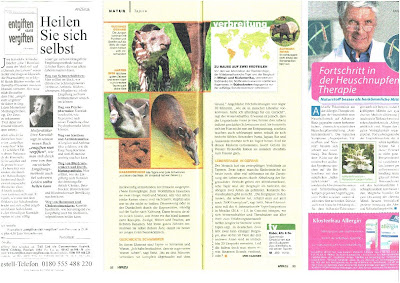 The famous German TV + radio magazine “Hoerzu” (transl.: Listen) published a tapir story in its recent issue. The editor talked with me about my dissertation and refers to me in the text. He also quotes the TSG [Tapir Specialist Group] website and mentions the tapir symposium! Have a look at it!

I have the document in better resolution if you need (6 + 4 MB).

Tapirs and the survival of fruiting plants 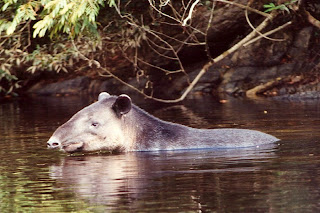 A Baird's tapir on the Macal River in Belize
Photo by Sharon Matola, 2001
There is an interesting note in this article on Shifting Baselines that helps put modern-day tapirs into perspective regarding their role in helping to preserve not only the rainforest, but life on Earth as we know it. The photo above could not be taken today, as a dam on the Macal River has so drastically altered this vital ecosystem of Belize that it no longer functions in its ancient capacity. To quote the final sentence of the article: "They warn that the fast-paced decline of those animals in many forests today poses a serious threat for these unique [fruiting] plant species." I recommend reading the whole thing. It's an eye-opener.
Posted by tapirgal at 4/02/2008 09:54:00 AM No comments: