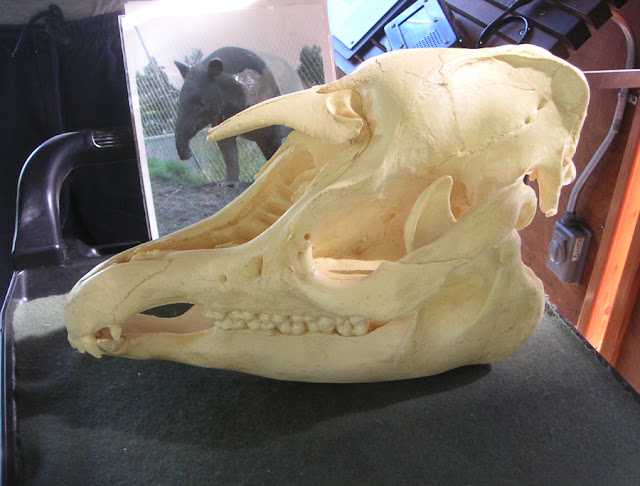 There was a tapir skull on display outside the Asian tapir enclosure at Point Defiance Zoo on one of my trips up there in 2006. Tapir skulls are interesting and there was a nice young woman giving info to anyone who would listen, explaining points about the skull. Notice the huge area between the top of the jaw and that small triangle of bone above it. This is the space necessary for all the passages and muscles of the tapir's nose. 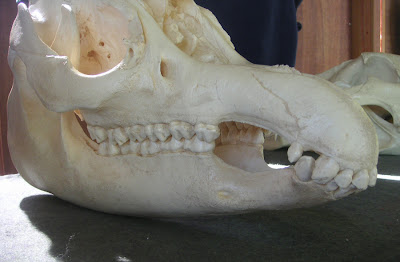 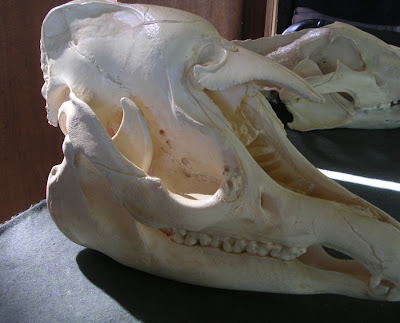 The eye socket is not enclosed, but is wide open towards the back of the head. This is a primitive form not seen in many mammals. 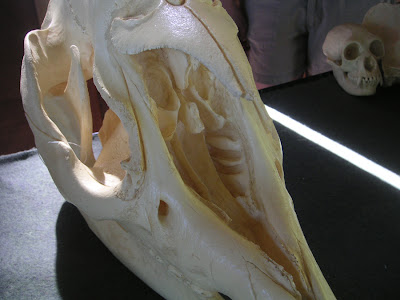 Check out the inside of the nasal cavity. I'm not sure what those parallel ridges are for. And check out the guy in the corner. See what I mean about the eye sockets being different?


Please e-mail your photos and text if you would like to see them on this blog.
This blog is sponsored by Tapir and Friends Animal Store.
Join us on Facebook.
Join WORLD TAPIR DAY on Facebook.
Posted by tapirgal at 11/26/2011 04:26:00 PM 1 comment: 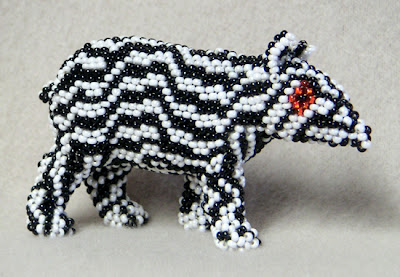 It was another one of those very lucky days when Catherine Todd (same last name, no relation) contacted me about taking some of our plastic animals to Guatemala so the artisans could craft beaded animals with the plastic replicas as a realistically-shaped base. The subject at hand was camels, but we thought it would be fun to make some beaded tapirs as well. Imagine my delight when these cute animals came back in the mail, their plastic bodies covered in shiny seed beads stitched together into a brand new creation. You don't find beaded tapirs just anywhere, trust me! I've looked! When you purchase one of these unique animals from our collection, you help in a number of ways. You help save tapirs, because that's what we do. You help the local artisans in Guatemala who need an outlet for their work (yes, jobs!), and you help my new friend Catherine with her sustainable business of working with the artisans of Guatemala to maintain jobs for themselves and make beautiful art for many people around the world to enjoy. Check out our other tapir items as well as our page of beaded animal art!
About Baby Tapirs
Baby tapirs are some of the most adorable and engaging animals on Earth! There are four species of tapir, and the babies of all species are marked with their distinguishing spots and stripes. The stripes on our beaded baby tapir do not match those of any particular species, so you can imagine it's whichever species you like best. Baby tapirs are quite friendly and lovable. They can stand and walk almost immediately, and they quickly begin to explore their world with amusing curiosity. It takes a gestation period of about 13 months for a pair to produce one baby. Can you believe that? It's one of the longest gestation periods among mammals. Even horses give birth after about 11 months. Because only one baby is born per pregnancy, and because the gestation period is so long, the tapirs are said to have a long "recruitment period." This means that for every tapir that is killed in the wild (or that dies of natural causes), it takes a very long time to replace that animal. This is one reason why hunting and destruction of habitat are so devastating to the Earth's dwindling population of tapirs. You can purchase this beaded tapir, take it home, and be proud not only to have a beautiful, unique, hand-made work of art, but also to know that your purchase keeps the Tapir Preservation Fund going so we can support tapir conservation in the field.
Please e-mail your photos and text if you would like to see them on this blog.
This blog is sponsored by Tapir and Friends Animal Store.
Join us on Facebook.
Join WORLD TAPIR DAY on Facebook.
Posted by tapirgal at 11/17/2011 11:12:00 AM No comments: 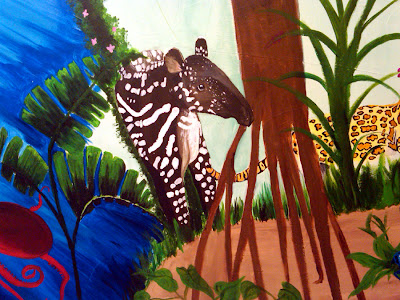 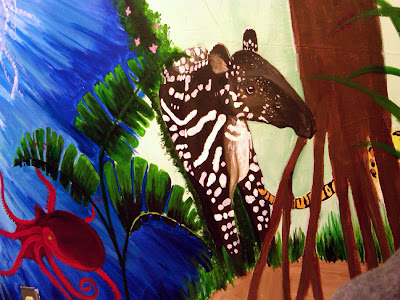 Astoria, Oregon ~ March 3, 2011
You never know where you're going to find a tapir! Fortunately, I had my cell phone with me and it had a camera.
I had the worst flu or cold of my life - or whatever kind of bug it was - in late February and early March of this year, and on March 3rd I took myself to the Emergency Room to figure out why I felt so bad. As it turned out, I had a freaky reaction to Tylenol PM and I was having something just short of panic attacks. Since I wasn't seriously ill or damaged, it took them over three hours to get around to processing my tests. Meanwhile, look who was there to keep me company! Under the circumstances, I was especially glad to have the little tapir by my side.
I don't know who got the idea to paint a mural with a TAPIR of all things in the temperate lands of northwestern Oregon, but we are, after all, in a rainforest, albeit different from the one where this little Asian tapir lives in real life.
Please e-mail your photos and text if you would like to see them on this blog.
This blog is sponsored by Tapir and Friends Animal Store.
Join us on Facebook.
Join WORLD TAPIR DAY on Facebook.
Posted by tapirgal at 11/04/2011 01:35:00 PM No comments: