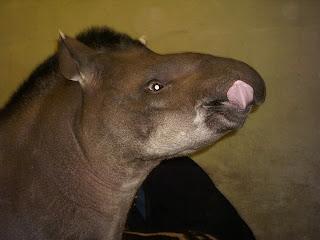 It's not just a tongue, but much of the tapir, too, of course. I have a weakness for tapir tongues, and I always have. Send me a pic of a tapir and its tongue and I'll probably post it before you can say, "No! Stop!" Anyway, this one is from Laura Robbins, a keeper (her charges include some lowland tapirs) at Dudley Zoo in the UK. Laura did not say "No, stop," when I wanted to put the photo online - fortunately, she said "yes." She also noted, "She's a little monster but she's so sweet, she's feeling a little sorry for herself now 'cause she has a few cuts on the face! Poor girl shes ok though." Laura is continuing coursework for her zoo career. Laura, thank you!

Here's another tapir tongue that took my fancy. Years ago, I took the photo and then painted from it. 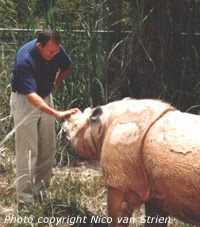 Photo copyright Nico van Strien
Today the world received the news that a much-loved and respected conservationist had passed away this morning. He was also one of the most knowledgeable humans regarding the Malayan, Malay, or Asian tapir. Patricia Medici wrote to the Tapir Specialist Group:

It is with great sadness that I forward the note below from Mrs. Tineke van Strien, Nico van Strien's wife. Nico passed away this morning in his home in the Netherlands.

Nico spent most of his life fighting for the conservation of Asian rhinos in Southeast Asia. Besides that, he was a huge supporter of Malayan tapir conservation and a key member of the Tapir Specialist Group in the region.

Nico will be greatly missed.

In her e-mail, Tineke van Strien-Reijgersberg wrote that Nicolaas Jan van Strien was born 1 April 1946 in Etterbeek, Belgium, and died 7 February 2008 in Doorn, The Netherlands. She said, "Nico peacefully passed away at home after his struggle against an aggressive cancer. . . . We are very sad that he is no longer with us, but we will cherish the many good memories of him as a loving, caring and inspiring person."

In my work with the Tapir Specialist Group, I had several occasions to contact Nico, to ask advice as well as to ask him if he would author a chapter in a book (available only in German) entitled Die Tapire, and published by Filander Verlag with myself and Dr. Udo Ganslosser as editors. The chapter appears as "Der Schabrackentapir" by "Erik Meijaard (Nico's long-time working partner) und Nico van Strien." I hope someday to be able to offer the book and this valuable chapter in English.

Although I never met him in person, I felt from our first contact that here was a person who not only the animals, but also the conservationists, could rely on. He was responsive amidst his many activities, reliable, knowledgeable, and a pleasure to work with. I always felt that when Nico was involved, a situation was in the best hands possible, whether the circumstances were in the field or on paper. I feel privileged to have had the opportunity to cross paths with him. His name and the energy behind it will always feel vital to me.

I found the photo at the top of this page online and borrowed it from the Wildlife Conservation Network (WCN). You can read more about Nico's work with rhinos on this page, or simply search the web. It's not hard to find him.

Tapir Wachswaren GmbH: Do tapirs polish their shoes? Read on . . .

I want to thank our friends at Tapir Wachswaren GmbH in Germany for their thoughtful and generous donation to the Tapir Preservation Fund. As always, this money is used for projects in the field, as we raise money for TPF's business expenses and some of the field work from our online gift shop.

Tapir Wachswaren sells high-quality shoe polish and is an environmentally-conscious company. They also love tapirs. We love their logo. Please follow the first link on this post and have a look for yourself. You might want to buy some shoe polish just to get the beautiful can even if you wear shoes that don't require polish! It's VERY cool!
Posted by tapirgal at 2/01/2008 01:30:00 PM No comments: