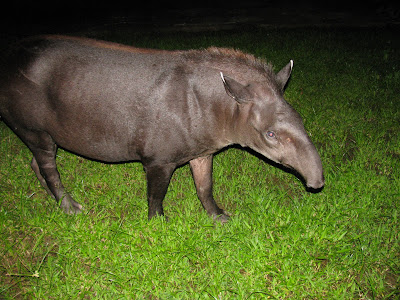 I never know what will show up in my in-box. Yesterday was a treat. Xavier Cornejo, an Ecuadorian botanist currently working in the New York Botanical Garden, sent us some photos of Carla, a lowland tapir (Tapirus terrestris) who regularly visits the Yasuni Biological Station in Yasuni National Park, Ecuador. Xavier was visiting the station in Yasuni Biological Station to study some families of plants for the Flora of Ecuador project, when he met his first tapir, Carla. Yasuni NP is in the rainforest on the border with Peru. Note the long hair of Carla's mane and the strip of long hair on her back. I've seen this one or two times, and I'm still trying to remember where. It may have been on a Baird's tapir. I remember thinking, "So this is what the books were referring to." It's extremely uncommon in the tapirs I've seen. Does anyone have observations on this? Here's Xavier meeting Carla. Continue down the blog to learn more about the friendly Carla and her relationship with the research station. Carla is about 2 years and 2 months old here, and April 7, 2009, will be the two-year anniversary of her adoption by the station. Carla is free to come and go as she pleases. She enjoys visiting, and you'll hear about that in a minute. 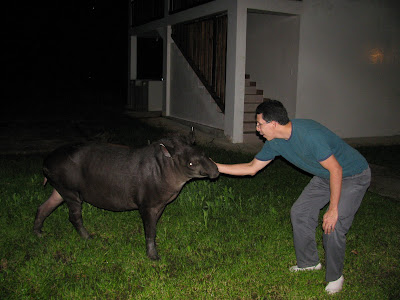 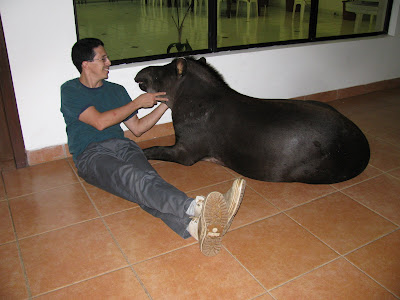 Xavier and Carla are waiting outside the dining hall of Yasuni Biological Station. Did anyone say "food"? 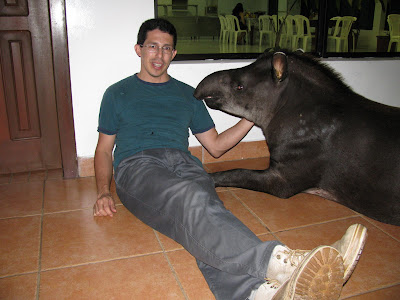 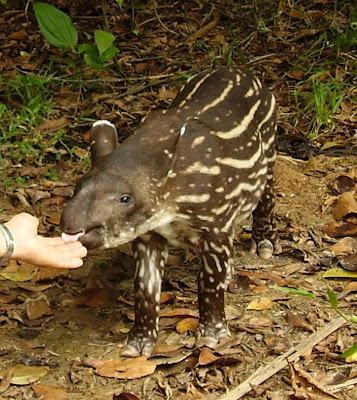 This photo of Carla as a baby was sent by Pablo Alvia, who currently works in the Yasuni National Park. The age estimate give is approximately four months, but I wonder because she still has so many stripes. Does anyone remember if there is a photo study of the way juvenile lowland tapirs look at various ages? Carla made her first appearance at the biological station on April 7, 2007. The photo is labelled "Dantito," a little tapir.
Xavier said that Carla (as an adult) is a very quiet and nice animal. It seems that temperament varies extremely from one tapir to the next. I raised two (one lowland male and one Baird's female). I got each one as a striped baby, and the male was a biter from the youngest age, while the female never tried to bite even up to the age of 8 months, at which time she went to live at the San Diego Zoo. I should also mention that tapirs are large animal with strong jaws, and they are also curious. Sometimes they will simply nibble on things to test them, and you don't want that thing to be your fingers! I mentioned tapir temperament to Xavier, and asked a lot of questions. He replied with the following e-mail:
"I'm a biologist specialized in botany. I know something about some wild species of animals from Ecuador, but unfortunately I know nothing about Tapirs. Somebody told me that that Tapir from Yasuni National Park (NE Ecuador, Orellana Prov.) is a female, and is fed with bananas. In one of the photos (with me) she is resting outside the restaurant of the Biological Station, looking throught the window, waiting for somebody to feed her. I was stroking her neck (she likes it), but a couple of minutes after that photo (with me sitting on the ground), she was smelling me and relatively softly bit my leg, that scared me a bit because she is a huge animal. I noticed that she didn't like when I stroked her nose and close to her eyes. That tapir is the pet of the Biological Station of Yasuni National Park, she lives there and freely walks in the night. The first meeting with her was some minutes before while I was pressing the plants I collected during the day. My plants where organized in piles, she suddenly appeared in the darkness smelling them, looking for something to eat."
Oops! In the US we have a joke when you don't do your schoolwork; you tell the teacher that that your dog ate the homework. How would you explain that a tapir ate your botany project?
In addition to the pictures of Carla, Xavier forwarded two photos taken by Pablo Alvia of a lowland tapir skull housed at the Yasuni Biological Station: 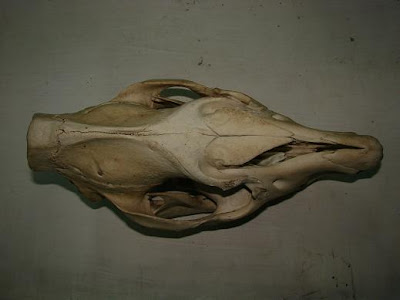 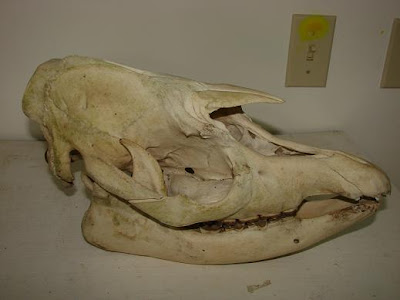 Side view of lowland tapir skull by Pablo Alvia, Ecuador.
The side view of the skull shows blackened molars. I'd like to ask the experts in the field to what they would attribute this condition of the teeth in the Yasuni National Park region of Ecuador.
Our thanks to Xavier and Pablo for their contributions to this blog. I have also added the photos to our lowland tapir photo album and lowland tapir album of natural history images. Copies of these photos are in the database of the Museum at the Faculty of Natural Sciences, University of Guayaquil, Ecuador.
Posted by tapirgal at 2/13/2009 09:05:00 AM No comments: 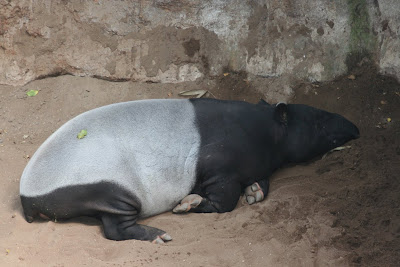 Please e-mail your photos and text if you would like to see them on this blog.
This blog is sponsored by Tapir and Friends Animal Store.
Join WORLD TAPIR DAY on Facebook.
Posted by tapirgal at 2/09/2009 04:10:00 PM No comments: 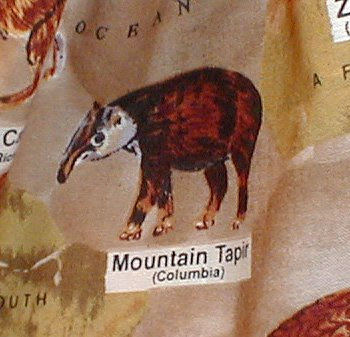 I found this while going through some old photos. It's a mountain tapir commercially printed on fabric. In the corner you can see the back of a pangolin, too. That's pretty amazing! It's too bad they spelled Colombia wrong, but how often do you see a tapir on fabric? The theme was endangered species. Unfortunately you can't get the fabric any more. I took the photo of it in 2001. Here's a link to more mountain tapir art and craft.

I received this note yesterday:

We have just found your tapirgallery.blogspot.com. Nice site for tapir-fans like us! But did you know there was a tapir born in ARTIS Amsterdam in December 2008? And they made films (birth + first steps), here you can find the first: http://www.artis.nl/main.php?pagina=paginas/a/tapirjong_film.html (to
see the film of the birth follow the link:

Note: I could not make a direct link to the birth video. You will have to click on the link that says: >>Bekijk het geboortefilmpje en link door naar de 1e filmbeelden (as Georg and Ingrid noted in their original e-mail).
Posted by tapirgal at 2/04/2009 01:05:00 PM No comments:

More tapirs in the snow

I still don't know if you have to be a member of Facebook to see the photos (I expect so, maybe someone will tell me), but Laura Robbins has another fun album posted with some super nice pix of tapirs in the snow (snow album part 2) and the incredible Dudley Castle also in the snow. There are also meerkats, reindeer, a red panda and more. Have fun :) If you're not a Facebook member, it might be worth it to join.
Posted by tapirgal at 2/03/2009 12:39:00 PM 2 comments: 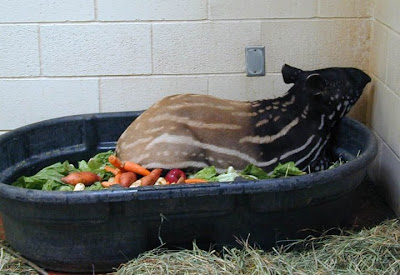 I've added another tapir slide show to the site - this time it's on the Malayan tapir pictures page:

The photo above does not move, so don't worry about it, it's just a teaser for the slide show. This pic was sent by Heidi Frohring, who many of you will remember was a totally one-of-a-kind tapir keeper at the Woodland Park Zoo in Seattle. She named this photo "Tapir Salad." There are many of her photos in the slide show/album. As of today, I don't have them all labelled. I've spent the day working on some stuff for the gift shop. I'm starting to use slide shows there, too. It's loads of fun. We're going to sort the animals regionally in addition to the other ways we have them sorted, and I've started with the Galapagos page (which has relatively few animals on it). It's not done yet as of this moment, but you can look at.