Tara tapir must be getting very close to giving birth now. She was breathing heavily last night, but today there's no new calf. She certainly looks ready. You might like to check in with the tapir cam link above and read some of the viewer comments beneath the text, too. Toby is also a favorite and it's fun to watch the two of them. They get along famously.

I printed a new URL the other day, but they've switched back to the one above. I also like looking at their other cams (not all animals, thought mosltly in the UK time zone): 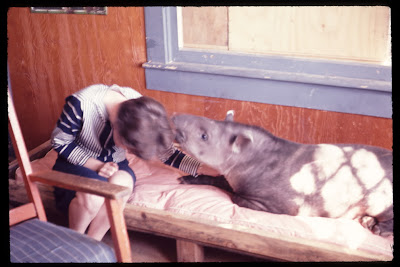 It was a very special treat today when I opened my e-mail and found four photos of Stanley K. Tapir that I hadn't known existed. They were taken approximately March or April 1969. Barry wrote: "We used to have Sunday morning pancakes at IHOP and bring the left-overs up to your place for Stanley." Well, this is an episode I had completely forgotten. Here is Candace in four photos with Stanley. They brought back memories, for sure. Stanley was about four or five months old here. I'd forgotten that he had such a nice cushy bed inside the house at that age. It wasn't long before the big, strong tapir was completely relegated to a pen outdoors at the back of the house, and I know he didn't like that! In the picture above, the ever-curious tapir was checking out Candy's hair. 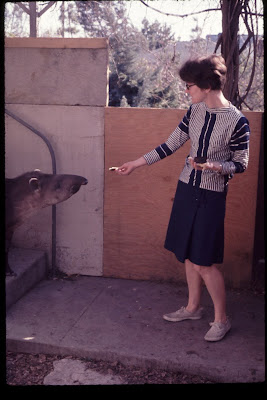 Here's Candy enticing Stanley to come outside using the leftover pancakes as bait. Of course, we gave the tapir regular feedings of a diet suggested by San Diego Zoo including alfalfa hay, horse meal (Trophy brand), fresh fruit and vegetables, but he would eat almost anything and had a particular fondness for most things that people eat. It's almost impossible to push a tapir anywhere (see the end of the post), but he could be led with bananas, pancakes, or anything that smelled really good. 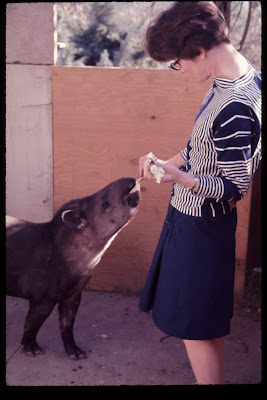 Happy tapir. I'd forgotten that he had this much white under this throat. It seems to have faded with age, because I don't see it in his later photos - this one, for instance. 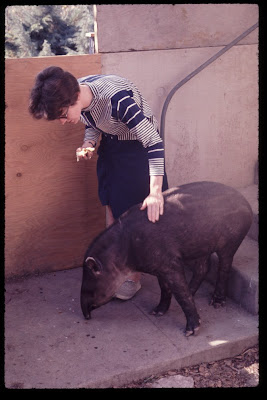 He's looking for the crumbs :) Big, big thanks to Barry and Candace! These pictures really made my day!
In the first paragraph, I mentioned that you can't push a tapir. You can try, but every time I've done it, even when the tapir was half the size that Stanley is here, he would lean back into me. I thought he was just being stubborn, but years later I heard something on a video shown on PBS by "the real horse whisperer," Monty Roberts. (This guy was amazing, by the way, find the video if you can.) He understood horse behavior so well that it was as if the horse heard his thoughts and did what he wanted. He simply knew how the horse would respond to a certain stimulus and behaved in such a way that would most times give him the reaction he wanted. Tapirs are related to horses, and I expect they behave the same way to the stimulus of being pushed or poked. They lean into it. Monty explained that when a horse is attacked by a large cat such as a mountain lion, it pushes toward the attacking claws. If it pulled away, the skin and muscle would rip and damage the horse terribly. By leaning back into the pressure, the horse may have a chance to disengage the claws before it runs or frightens away the cat. I've never seen this, I'm only remembering what I heard in the video. It would be interesting if anyone had further information.
Posted by tapirgal at 3/24/2009 05:42:00 PM 5 comments: 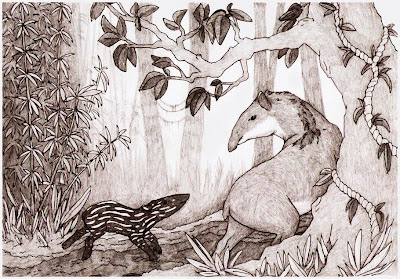 I received an e-mail the other day from Elisabeth Nönnig of Hamburg with some nice comments about our tapir blog. She included a link to a drawing (shown above) that she had made recently and gave us permission to use it. Her description on the web page is: "some lowland tapirs in what i probably think a jungle in south america looks like (bamboo?!, trees, grass, vines, mud for tapirs to sleep in). i'm not used to drawing backgrounds, or plants, anyway. ballpoint and pencil. took 2 lectures to finish.)"

About the video, Elisabeth said, "This video is probably the best that i have to offer so far: http://www.youtube.com/watch?v=juUVg0-w4f0 ; it's from Duisburg zoo in Germany, but almost a year old and rather short. I live in Hamburg, Germany, and the local zoo has at least 3 lowland tapirs. They are very cute and they even come to the fence so you can pet them. I must remember to bring my camera next time I visit :) I've also been to Artis zoo in Amsterdam a few weeks ago, but the tapirs were inside and there was only a camera showing the mother and the new baby tapir."
Thanks very much for your contributions, Elisabeth!
Posted by tapirgal at 3/24/2009 04:44:00 PM No comments:

Please check out the first post and the reply on this page of our Google Tapir's group:

Briefly, there's a new URL for Toby and Tara at Noah's Ark Zoo and there's a brand new tapir cam installed in Manchester, all in the UK. If you get darkness on the Manchester camera, it could be night time. Toby and Tara's camera has lighting so you can see what's going on at any hour, as there will be a new baby tapir soon!
Posted by tapirgal at 3/22/2009 02:49:00 PM No comments: 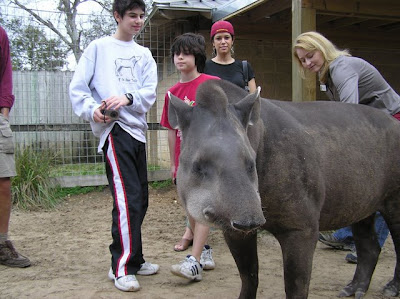 When Jordan Shenhar and his family visited the Houston Zoo in February, they were given the royal tapir treatment. There's Jordan on the left wearing a lowland tapir sweatshirt he bought from our online tapir gift shop. Jordan has been a fan of tapirs for a number of years and a contributor to tapir conservation. I had told him to let me know if he was planning to visit the Houston Zoo, and he remembered. One day I got an e-mail saying that Jordan and his family were indeed planning a visit, so I contacted Kelly Russo (on the right) who is a very active member of the IUCN/SSC Tapir Specialist Group. As the Houston Zoo is also a huge supporter of tapirs and tapir conservation, it all worked out. Jordan got to pet a tapir, we ended up with some amazing photos to share with you, and it looks like the tapirs had a pretty good time, too. The tapir in the photos is "Casaba," an older female lowland tapir (Tapirus terrestris) and long-time resident of the Houston Zoo.

See all 35 photos in TPF's online Lowland Tapir album! Big thanks to Jordan and his family for these photos and to the Houston Zoo for their permission to use them. Jordan and I will continue to work on the captions, but I wanted to get the pictures online ASAP. The link above goes to the first photo in the series.
Posted by tapirgal at 3/20/2009 03:05:00 PM No comments: 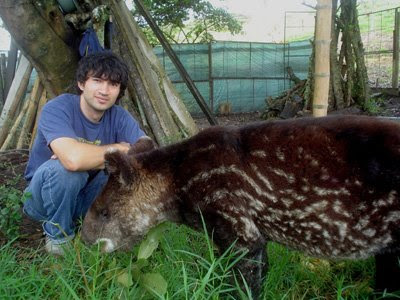 Two tapir researchers and conservationists who we've worked with over the past few years now have their own blogs! In the case of Sergio Sandoval, above, the blog is a personal presentation, where we'll be able to learn more about him, his work, and his country, Colombia. We are working on a new donation page for Sergio's tapir work. He has contributed many of the items in our online gift shop through his own artistic talents and by purchasing products for us that are made in Colombia. 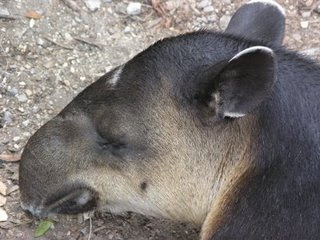 Georgina O'Farrill,
Baird's Tapir Project,
Mexico
Georgina's blog is about her tapir project in Mexico. Both Sergio and Georgina have been recipients of our Club Tapir donations (your contributions!), and we continue to support both projects when your donations allow us to do so. We'd like you to learn more about these projects and the people who dedicate their time to them. We look forward to watching both of these blogs grow! You can donate to Georgina's work via our online donation page (scroll down to the Baird's tapir projects). This page is new and growing!
------------------

The photos on this page are copyrighted by
Sergio Sandoval Arenas and Georgina O'Farrill.

One of our "TAPIRS Google Group" members, skoop102, posted some really interesting photos over there of lowland tapirs at the Twycross Zoo, UK. Let me know if you have any input on the questions these photos bring up, OK? Here's the discussion about those tapirs. 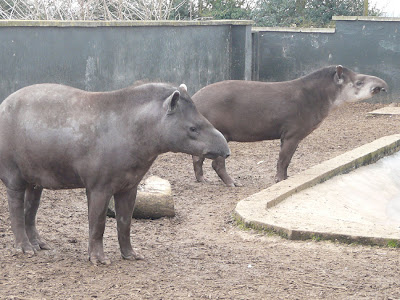 Photos contributed by Sarah Cooper (skoop102)
First posted on the Tapirs Google group
December 11, 2008
Sarah wrote:
Hi All.
I have added a few photographs from my recent visit to Twycross Zoo, UK.
A new pair of Brazilian tapirs are now on show.
This pair demonstrate the range of colours which 'they come in.
The female on the left has a very black face, and the male has a very pale face. She also had a very wrinkly snout and ears. He has hair sprouting from the base of his ears.
It is also to be noted that this pair both have some spots remaining on the legs (though not very visible on this photo), despite the fact that they are a few years old.
I believe they are called Muffin and Pele. 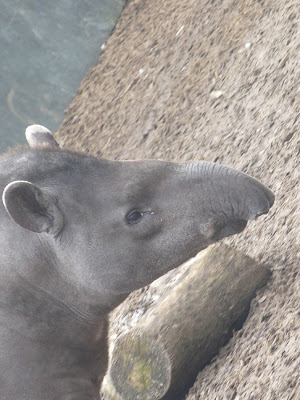 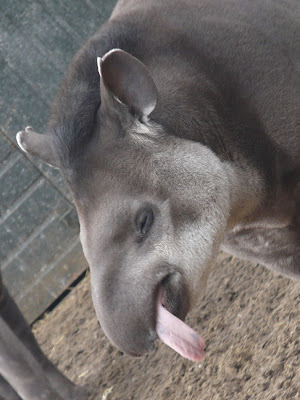 [Note: There was more to this discussion, which I'll transfer as I continue to work on dismantling the Google Group Tapirs discussion site. ~Sheryl]

Please e-mail your photos and text if you would like to see them on this blog.
This blog is sponsored by Tapir and Friends Animal Store.
Join WORLD TAPIR DAY on Facebook.
Posted by tapirgal at 3/02/2009 01:19:00 PM No comments: