The Tapir Fund Found a New Plastic Tapir For Your Collection 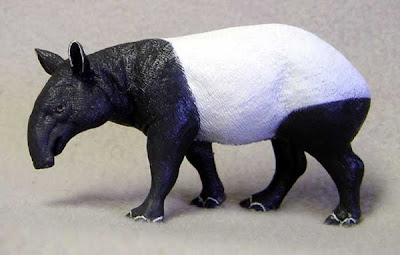 Our plastic museum-quality version of the Asian or Malayan tapir has the markings of a real tapir. The "saddle" which extends from its shoulder to its rump, the white rimmed ears, and the remaining black hair covering the legs, chest, and head mimic the pattern designed for camouflage. The plastic Asian tapir measures 4 1/4 inches in length, and 2 1/2 inches high. The realistic "floppy" snout, four-toed front and three-toed back feet (with a little hoof at the end of each toe) help make this the most realistic toy tapir we've ever seen. Other features include the white rims around each small hoof and the strongly chiseled indentation of the face muscles. Even the nostrils appear to flatten as they do in a real tapir. It even has short markings in the plastic indicating its fur coat. This delightful model will complete your diorama or please any tapir collector or collector of animal figurines. You may already be familiar with the quality produced by Safari, Ltd. This sturdy piece will also withstand handling and playtime. See our entire collection of tapirs.

Malayan tapirs (Tapirus indicus) grow to between 6 and 8 feet in length, stand 3 to 3.5 feet tall, and typically weigh between 550 and 700 pounds. Like the other types of tapir, they have small stubby tails and long, flexible proboscises. They have four toes on each front foot and three toes on each back foot. The Malayan Tapir has rather poor eyesight but excellent hearing and sense of smell. The easily identifiable markings (the saddle, white rimmed ears, black legs, chest, and head) make it more difficult to recognize it as a tapir, and other animals may mistake it for a large rock rather than a form of prey when it is lying down to sleep. Malayan Tapirs communicate with high-pitched squeaks and whistles. They usually prefer to live near water and often bathe and swim, and they are also able to climb steep slopes. Malayan Tapirs can live up to 30 years, both in the wild and in captivity. Malayan tapirs live in Southest Asia, where they have become extinct in some of their range; small populations still survive in Myanmar, Thailand, and Sumatra (Indonesia). In the past, scientists believed that tapirs live solitary lives, but in recent years, it has become clear that they can be found in small family groups. They do not live in herds, and are hard to located in the forest. Under ideal conditions, a tapir gives birth about every 18 months to two years, bearing only one calf at a time. The slow "recruitment rate" is one of the several reasons they are on their way to extinction. Read more about Malayan tapirs here.
Come see our new plastic tapir in our animal store!
This blog is sponsored by Tapir and Friends Animal Store.
Posted by tapirgal at 8/25/2010 03:00:00 PM No comments: 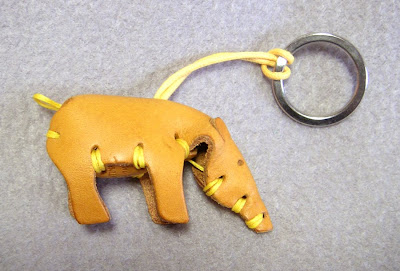 What should show up in the mail one day but this beautiful leather tapir keyring that Mark and Carol Reid found while visiting Italy. The text on the bottom says "Cuoeria Fiorentina." The link goes to their site, but the site looks pretty new, and I don't see the tapir (yet, anyway).

Please e-mail your photos and text if you would like to see them on this blog.
This blog is sponsored by Tapir and Friends Animal Store.
Join WORLD TAPIR DAY on Facebook.
Posted by tapirgal at 8/23/2010 08:21:00 AM No comments: