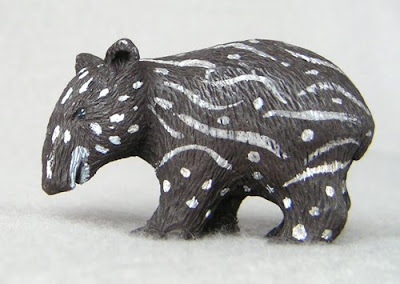 I wouldn't be telling the truth if I didn't say that the resin tapir (made especially for TPF) is CUTER THAN THE PHOTO. This teeny little guy was hard to photograph with the high-contrast white on dark chocolate background. Here's the story:

When we couldn't find a commercially-made plastic baby tapir, we had one made in resin. We call this little guy "Tapircito" (little tapir). At 2 inches from nose to tail, he is totally adorable and definitely "cito." Artist/biologist Sergio Sandoval created our resin baby mountain tapir especially for the Tapir Preservation Fund (TPF) to help raise money for tapir conservation in Colombia and other tapir range countries. Your purchase helps support field projects, genetic studies, and more. Sergio brought his unique artistic perspective to this creation. Tapircito is not only very cute, but also detailed and realistic. The short lines cast into the resin clearly represent the long fur of mountain tapir calves (as the babies are called). There are four toes on each front foot and three on each rear foot as in real tapirs. Not static as many plastic animals tend to be, Tapircito stands with his head curved to the left in a charmingly attentive pose. Our baby mountain tapir was first sculpted in clay by Sergio, then cast in resin at a factory in Bogotá, and finally painted by Sergio and his sister Marcela (also a biologist) using durable nontoxic paints made in the USA.

-- Sheryl (aka Tapirgal)
Please e-mail your photos and text if you would like to see them on this blog.
This blog is sponsored by Tapir and Friends Animal Store.
Join WORLD TAPIR DAY on Facebook.
Posted by tapirgal at 9/28/2007 12:43:00 PM